As we enter into the winter and holiday season it is reasonable we’ll also begin to see the rise of more abuse cases become a reality. There are numerous reasons for this. Some may be due to the fact more people are cooped up inside during colder months. We also see some families struggling with Christmas whether it’s getting the whole family together with high unmet expectations or the lack of funds to provide those gifts everyone wants. Also, there are those jobs that fall off during the colder months. And as is often the case, there can be more get-togethers around the Christmas season where booze can be free-flowing which contributes to an increase in violent tendencies.

As said well by a woman in a private message: I was a young mother with small children to raise. My husband was an alcoholic and often used his drinking to control and manipulate the family. If he started drinking then everyone walked on eggshells knowing that they had to watch their actions and what they said or he would go off! We were poor though I tried as hard as I could to make great memories for our two children. Winter was always so very hard for us. He’d hold up watching tv and drinking and I’d be so afraid of him exploding. When we had Christmas it was usually so scary for I did not know if any little thing would set him off and we’d end up being punished. Warmer weather meant he was out of the house more and I could breathe easier!

I too have experienced domestic violence and can relate to what she had to say. I remember those days when I was afraid to say the wrong thing or there would be an explosion. It is very hard to live in the lifestyle of abuse for it is cyclical. You go around trying to be ever so careful to not say or do the wrong thing then ….BAM! That evil person is back and your fear level just increased exponentially!  Stress is your constant companion. Your guts are all twisted up and you hurt all over!

So now, not only do you have to protect your children and yourself, you gotta make sure every item in the house is in its proper place, every can is turned just so, every towel is even, every speck of dust is gone and more or else! You also have to put your mask on and pretend all is well. And when he drags you off to your bedroom you try real hard to go to that safe place in your mind before he begins to rape you once again so hopefully, you won’t feel so much of the pain! As a parent, you try to absorb as much of the pain as possible to protect the children and you make yourself pretend to enjoy what’s happening to your body in your own home just to be able to survive another day!

And no matter what….you don’t resist, you don’t laugh inappropriately, you don’t bargain. You are compliant! You are a ‘good girl’! You are a pleasing wife! Or else! And you really don’t wanta find what the ‘or else’ could be, now do you?

Then the sweet phase of the cycle returns and all is calm for a bit but only on the surface. Because you know from experience that sooner rather than later the monster will awaken and you will once again be on guard for whatever is dealt to you.

It’s very hard to reach out for help but I encourage you to do so! You do not have to suffer alone. Neither should your children!

I pushed through it instead of leaving. Mainly I believe because I didn’t exactly know how to go about doing so. And also because I was scared to leave for I’d been told if I did, “I’ll hunt you down. I’ll make sure the kids are safe then I’ll kill you very slowly!”  How does one plan to leave an abusive relationship? Is there a ‘Leave Your Abusive Relationship for Dummies’ book? I don’t think so! 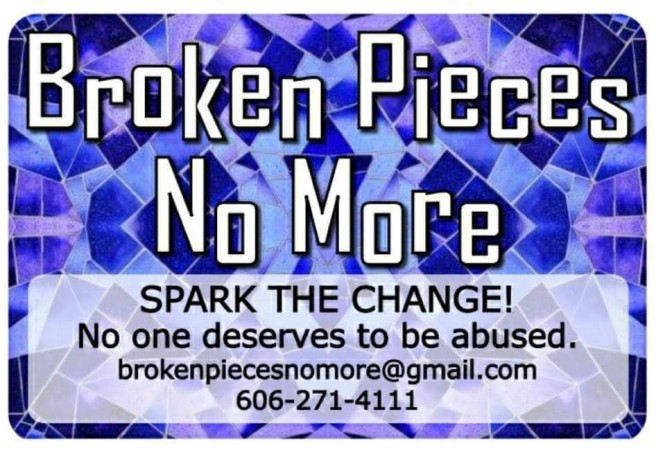 How are you coping with an abusive relationship? Have you reached a point where you’re ready to consider leaving? Do you know what to do to prepare?

We are here to help guide you to those who are equipped to escape. You deserve better!

We are here to listen!

We at Broken Pieces No More Inc would love to hear from you. You can find us on social media…Instagram, Twitter or facebook or you can drop a message at brokenpiecesnomore@gmail.com or send a letter to PO Box 1373 Somerset, Ky 42502